I am a three-chord girl to my very core. Although I like lots of different kinds of music, from baroque to hillbilly to shoegaze and much more, it’s garage rock that makes up my DNA. For me, the DIY joyful fun of garage rock is the essence of what rock n’ roll is all about: a rebellion against the staid, the safe, the humorless, and perfectionist. Garage Rock is the beloved Village Idiot in the expansive kingdom of rock, while its close cousin, Punk, is more the Juvenile Delinquent. They do hang out together a lot, but they aren’t quite the same. . .Punk occasionally ends up in the Village Jail, and then Garage Rock bakes him an escape cake. . . with a spoon in it instead of a file. Oh, Garage Rock!

Although it’s possible to point to some very early blues/country/R&B recordings as the progenitors of garage rock, the term didn’t come into use until the mid-‘60s when millions of Baby Boomer teens were inspired by the Beatles and pals to pick up cheap guitars and amps and start their own musical revolutions in countless basements, bedrooms, and yes, garages, three chords at a time. This particular incarnation of garage rock really only lasted around three or four years as a Top 40 staple – rock n’ roll by nature is an always-evolving beast – but interest in the aggressive, simple style was never gone for good.

And that brings us to a new movie featuring the most current crop of garage rock practitioners, brought to us by carmaker Scion. I was able to attend a preview showing of New Garage Explosion!!: In Love With These Times at Metro Cinemas in Seattle, and thoroughly enjoyed the 73-minute documentary. Filmed in a standard rock doc style, the movie relies heavily on interview segments with working musicians/record store owners/record label owners/ record collectors (I add the slashes because most garage rock people are several if not all of those descriptions). It’s intercut with generous, gritty, glorious performance clips of the Black Lips, Thee Oh Sees, the Vivian Girls, Davila 666, the Dirtbombs (playing literally over a bowling alley) and more, including the late Jay Reatard, who died three months after being interviewed for the film. There is a strong feeling of community in this film, even through wide differences in performance style, age, gender, gender preference, and geographical location. There is something heartening in seeing babyfaced 24-year-old DIY sensation Ty Segall hold up an X album in glowing worship, contrasted with married 60-something couple Fred and Toody Cole, who still ride in a beat-up van to gigs to play as Pierced Arrows.

No one is going to get rich playing garage rock, so the film does spend significant time showing how the musicians try to make it all work somehow. The DIY nature of the music leads naturally into DIY promotion (the lead singer of Smith Westerns is shown popping into an American Apparel store to invite anyone there to that night’s show), DIY merch and music distribution. I am not sure that the film should have spent as much time as it did on the vinyl record/collector focus; it’s not the sole domain of the garage rocker, and while it was cool to see all the record sleeves and colored vinyl, it wasn’t totally necessary. I think I would have taken those minutes and spent them on a little more garage rock backstory.

My favorite moment amidst all the weirdos and wonders, is when Fred Cole takes us into the bowels of his Pacific NW home, a tiny, cluttered rock n’ roll house to be sure, to show us his record cutter. He explains how important it was to him to have it, as he brushes dust and fine cigarette ash off its shiny surface, because no mastering service could ever get his records “hot” enough. He wanted the distortion, that buzz on the record needle where it nearly pops out of the groove. This particular cutter, he found out, was THE one used for the Kingsmen’s “Louie Louie,” the most-famous garage rock song of all time. For years, he couldn’t get the man who owned it to sell it to him, although he kept trying. But on his 38th birthday, wife Toody presented the cutter to him as a gift, bought for $200. When he tells that last line to the story, his eyes well up with tears.

I get it, Fred, I totally get it. If you love garage rock, you just really love it.

“New Garage Explosion!!: In Love With These Times” is currently in very limited preview theatrical release, but can also be seen in its entirety online at VBS TV. It’s a very enjoyable and enlightening look at a subgenre of rock that is likely to continue and thrive as long as rock’s kingdom reigns, with a delighted throng of dancing Village Idiots having the best time of all. 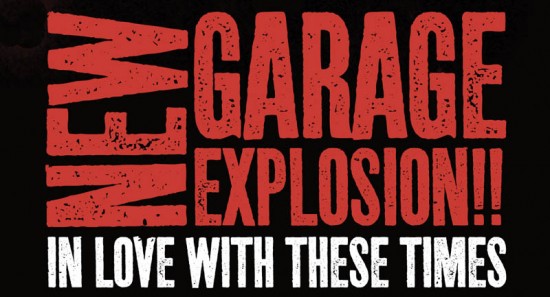