Danish musician Anders Trentemøller‘s got the magic musical touch. His debut LP, 2006’s the Last Resort included a variety of electronic instrumental (mostly) scorchers, including “Evil Dub,” “Always Something Better,” “Nightwalker,” “Chameleon” and “Into the Trees.” Last year Trentemøller changed a key tactic by adding vocalists to several tracks on his follow up, Into the Great Wide Yonder. “Sycamore Feeling” features Marie Fisker, Solveig Sandnes and Josephine Philip sing on “Tide” and “. . . Even Though You’re With Another Girl,” respectively, and a male voice gets emphasized by Guillemots’ Fyfe Dangerfield on “Neverglade.” The results are beautiful. I talked with Trentemøller about his albums, remixing, the video for “Moan,” and his work as a kindergarten teacher.

What drew you to using surfer sounds on the new album?

Anders Trentemøller: I was quite inspired by the surf ‘60s guitar sound coming from bands like the Ventures and I wanted to incorporate that sound in a more electronic world.

T: I’ve always been inspired dark, mystical vibes and this song has some inspiration from horror movies from the ‘60s also. I really liked to mix that into my music. That song just turned out to be quite dark and a little bit scary in a way. I thought the title fit the song quite well.

Your video for “Moan” is very moving. How did you develop that?

AT: This video was done with a Danish director called Niels Gråbøl. I was talking to him about doing a video that was not taking the lyrics too seriously. “Moan” is a simple love story [instead of it being about] about a girl missing her boyfriend we thought it would be funny if it was about a dog missing his owner out in outerspace. In the computer effects we also got the dog to sing in the satellite. That was quite fun – and a bizarre twist.

You’ve got several singers, such as Marie Fisker on Into the Great Wide Yonder. How did you select them?

AT: I was choosing them because of their beautiful voices and Copenhagen is quite a small music scene. People pretty much know each other from various bands and people tend to work together on different levels, so it was quite easy for me to chose them because I knew them privately and I knew that they were capable of adding something personal and unique to the songs. It was quite important for me this time to have some vocals on the album because I felt that I had explored the whole instrumental album thing with my first album. It was a challenge for me to work with lyricists and vocalists.

Do you have remixed planned in the near future?

AT: Yeah, I’ve just done a remix for Unkle – you can download (“The Answer”) that remix for free – and then Unkle remixed one of my tracks from the new album, ….. that will be out very soon. I don’t know if you know this Danish band called Efterklang, but they also just remixed me and I remixed them. So I’ve literally been doing these remix swaps. That is really fun to have someone really admire remixing one of your tracks.

Does where you live in Copenhagen inspire your writing?

AT: I don’t get inspired because I think it’s the most hardcore area in Copenhagen, it’s like the red-light district but with a lot of junkies.

When you first started making music you were in a rock band, what kind of rock?

T: When I started I was very much inspired by English bands like the Smiths.

You’ve started a new label, In My Room. Has this given you a lot of freedom?

AT: For me it was done out of being able to have the freedom to do exactly what I want to do. If you’re on a major label you often get dictated to. On the small, independent label there’s much more freedom. It was also for me to be sure that I had that freedom in the future.

How do you incorporate all your ideas into music?

AT: It’s all about making the music that sounds right. There are no real rules. It’s fun to mix different music styles and get it all together into one organic album that doesn’t go into too many directions, with a flow that’s just natural. That’s what I’m looking for when I make music.

You worked as a kindergarten teacher?

AT: It was fun to work with the children, but to be honest the teachers were a little . . . they had been working there for too many years. It was very strict.

What can you tell me about Darkness Falls?

AT: Darkness Falls is a new Danish group that I’m producing. They have just released their first EP. I produced that album and the singer from that group, Josephine Philip, is singing on my tour. She’s the one singing “. . . Even Though You’re With Another Girl.” They will come out with a full-length in the autumn, so that’s something we’re really looking forward to.

AT: It’s good, simple pop melodies with a special twist. It was fun for me to produce something that was not my own material.

The rhythm in “. . . Even Though You’re With Another Girl” is really cool. Where did that come from?

AT: It’s inspired from a track by Iggy Pop called “Nightclubbing.” He was using a drum box, and I programmed the rhythm to sound the same way – and put a lot of extra things on top.

I love the photo you had done where you’re wearing a hat. Who took that?

AT: Casper Sejersen. He has done a lot of photo shoots with me. Normally I do not wear hats. 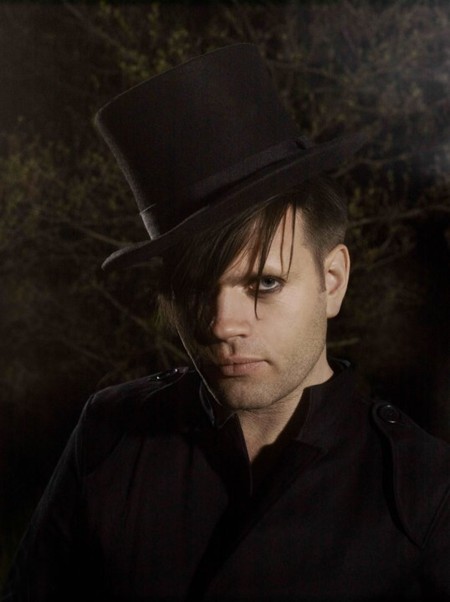