Lords of Acid has remained one the best bands to emerge from the ‘90s. They began as a project of the equally sublime Praga Khan [Maurice Engelen] and have so far released four albums, Lust, Voodoo-U, Our Little Secret and Farstucker, as well as several compilation/remix albums. Lords of Acid’s next CD is set for release this year – I cannot wait to hear it. They’ve maintained a permanent spot in my musical pleasure and the band returns to Seattle this Sunday, March 6th for a show at Studio Seven. I saw their Seattle show last year and it was one of the most important shows in my life. The driving force behind and in front of Lords of Acid, artist Maurice Engelen, aka Praga Khan, talked with me the other week right before starting the 2011 SonicAngel Lords of Acid Tour. Talking to the man who wrote some of my favorite music ever? Wonderful.

What do you think is behind Lords of Acid’s and Praga Khan’s popularity in the States?

Praga Khan: I think it was the fact that we were doing something unique. In those days there were two different two styles of music – you had dance music and industrial music. What we did was a mixture of these two, so we were using European dance beats but we were also using guitar lines. I think that combination made it special. On top of that we had these erotic lyrics that added a flavor to it. It was just a combination that wasn’t around. Sometimes you have dance stars trying to copy other bands and you don’t sound unique. I think that sounding unique was part of the success.

Your dad was an academic. Did you parents want you to go into music?

PK: No, not at all. He was really against it. Also my mom was really against it. In those days in the record business you didn’t make a lot of money, especially in Europe because there was not really a big record market. They thought I was going to end up a busker. It turned out fine. Now my mother is really proud – she follows everything I do.

She should be proud . . . I read that you toured in India early on and that’s where you selected the name Praga Khan?

PK: I was touring in the East, and Japan. It was always really difficult when I used my real name, Maurice Engelen. I always had to repeat it twenty times. So I thought maybe I better call myself John Doe or something. In India Raga Khan is like the most common name, but then I went to the offices of the composers society they had about fifty people with that name. So I said put a p in front of it – and they said, we do not have that. I said, okay, that is going to be me from now on.

What was traveling there like – have you been back?

PK: I’ve been to a lot of Eastern countries – it’s always a long flight of course. It’s very different from our Western society. There’s a lot of rules that need to be followed. I remember one of the first concerts I did in Japan – people were not reacting at all. When the show was finished they all gave me a standing ovation for ten minutes. That was really strange. During the concert I was wondering, what am I doing wrong? It’s their way of showing respect – not making noise between the songs. That’s just one of the things – there are dozens of things.

Have you finished the new Lords of Acid album?

PK: At this moment I’m working on the album. What I’ve experienced over the years is that it’s always very good to do a tour just before you go back into the studio. There’s a lot of fans you can talk to and get feedback. I always appreciate what they think of it. When you’re on tour you learn a lot.

What’s behind the song “I Sit on Acid”?

PK: It’s something you can see in different ways. You can see it in a sexual way, but you can see it in a drug way. We just wanted to play with the lyrics. Like the song “Pussy,” when you’re an innocent kid there’s nothing wrong with it, but when you’re an adult and you listen to it it’s something else. That’s really what I like – teasing people and trying to check out how far I can go. The good thing about Lords of Acid is that, over the years, we could always play all ages shows. Other bands who would copy Lords of Acid – because it was successful and they thought that’s what they had to do – would take it a little bit further. But when you take it further, then it loses the humor. That’s always been very important to Lords of Acids – that it’s not over the top. It’s tongue-in-cheek humor. When you’re a band and you try to copy Lords of Acid and you take it further then it becomes cheap. It needs to be funny. It was a problem – we didn’t do a lot of concerts in Belgium or in Europe because people all came out to see a sex show. If you want to see a sex show you better go to a sex club. With the shows we’ve always tried to create a social experience. People get dressed up and they’re part of the show.

Do you think the lyrics in Lords of Acid songs are empowering for men and women?

PK: A lot of people have told me over the years, that by listening to Lords of Acid they could express their sexuality. There’s nothing wrong in singing about sex. At the end of the day sex is the most normal thing in the world. It may be one of the few things that we all have in common.

Which Lords of Acid and Praga Khan albums are your favorites?

PK: They all sound quite different from each other. It’s not like we were a band that had a typical sound we tried doing over and over. There are a lot of bands that do that. I always want to be innovative. I always want to take it to the next level and I’m not afraid to change styles. I think that’s what keeps it interesting. When people hear the new tracks they’re going to be extremely surprised. The last thing I want to do is copy one of my own albums. You have to take some risks in your life. A fan who’s followed Lords of Acid all through the years is a real fan. Not the fans that keep nagging about the first album. When you follow an artist, you follow his career. That’s what makes it interesting, that it’s not always the same. There are a lot of popular bands nowadays who are using the old sounds again – the ones we used in the early ’90s – like next month there’s this new movie coming out called Sucker Punch. On the trailer they used “Crablouse” and new fans think it’s a new song. It was recorded back in 94. It sounds so up-to-date – that’s because people like Lady Gaga and Ke$ha are using these sounds so it’s like a cycle in time. We’re back where we started. They have virtual synth and we have the real ones.

Do you have a lot of keyboards/synths?

PK: I have, like a museum of them. It’s funny because these youngsters come into the studio and see these real synths and ask, is it real? They didn’t even know it existed. They’d only seen the virtual versions of them on their computer screens. It’s weird. It sounds almost the same but it’s virtual. 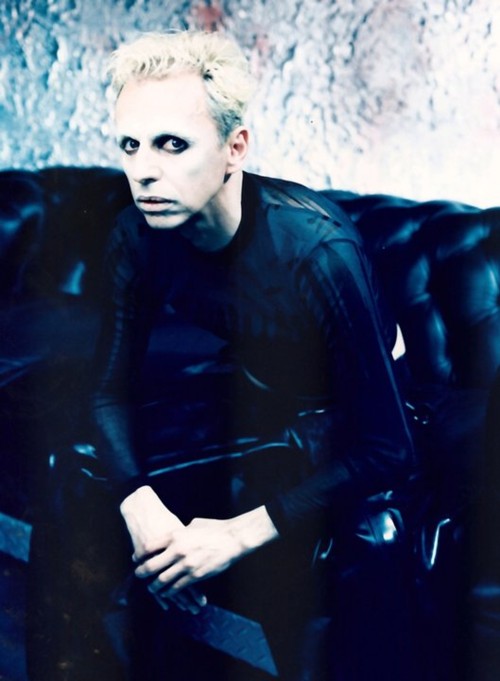 How did you come up with the name Lords of Acid?

I was looking at some of the Praga Khan videos, like “Love” and “Tausend Sterne“. What do you remember about making them?

PK: These are cool videos. The thing about videos is that it looks amazing but when you have to do it, it’s something else. It’s either a really long day . . . [for “Love”] it was extremely cold, in the evening and I had to jump around in the rain with my feet tied up. It looked amazing but it was extremely unhealthy.

You’ve started your own label, SonicAngel. What does it involve?

PK: It’s a new business model. Nowadays young musicians don’t get a lot of opportunities to release their material. It’s such a shame because they’re really talented. We came up with a new business model where we put the artist and the fans in the middle of a musical ecosystem. The fans can buy a share of the artist, and in return they get a free download. On top of that, they get a share of the profits when it turns profitable. It’s working extremely well. In Europe we’re now in our fifth month and so far we’ve had sixteen bands realize their dreams to make an album. We’re bringing the business model to the States so we hope there are going to be a lot of young American bands to come onto the platform. It’s a new way for launching new artists as an answer to the dying record business. The first artist we did in Europe – fans who invested 10 euros got a 26 euro profit. We were the best investment of 2011. After four months there are so many talented artists who are getting the opportunity to work in the studio. I hope that we can do the same thing in America.

That’s awesome. . . In the song “Kiss Eternal” there’s a lyric, You just don’t know how sweet it is/To die from a vampire’s kiss.Are you interested in vampires?

PK: About 10 years ago a good friend of mine was the leader of the vampire community in New York, Father Todd. In those days he had a very interesting website called Sanguinarium. I don’t know if it still exists. He was always coming to the show and that’s why I came up with the idea to do a vampire song. Now it’s extremely popular – vampires are everywhere now. In those days it was really cult. Now if you’re not into vampires, you’re not part of society anymore.

Will there be more Praga Khan albums?

PK: I think we’re going to do an album next year. Right now Lords of Acid is my main concern. I want to make an innovative, great record that everybody’s going to say we had to wait ten years but it was worth it.

Do you see a lot of live shows?

PK: I can go to a rock concert or I can go to a dance venue. I’ve always been like that. I remember back in the early ‘90s, in Europe – not in America, because I think people are so much more open minded in America than they are in Europe when it comes down to music – it was impossible for a dance band to perform in a rock venue or in a festival. If you were into rave you had to perform in rave festivals or in discotheques. When you had a rock band you played in a rock venue or a rock festival. Now people listen to everything. I’m really happy that it changed.

PK: It was called 54. We were the house band. A lot of crazy stuff was happening around us, in between us, everywhere. Just yesterday my ex-guitar player in Lords of Acid [he’s working in the studio now] said I’m so thankful that you asked me to do that movie. That was so crazy. That’s probably one of the craziest things we’ve ever done.

Not many bands can say they’ve done that.