The brilliant San Francisco artist K.Flay returns to Seattle’s Neumos on Monday, January 31st with Wallpaper and The Dance Party. I saw her open for Das Racist last year and was wowed by her exciting performance. She’s a wonderful singer, entertainer, and her lyrics and compositions are absolutely clever. I can’t wait to hear and see what she does next. Check out MASHed Potatoes and her brand new EP (which I reviewed here) before you go the show. They are both awesome fun, and everything about this woman screams class in a glass.

I saw you in Seattle with Das Racist in December. It was an amazing show.

K.Flay: Thank you. It was super fun. I had never played there before and I’d heard great things about the scene. It seemed like a very cool community [with] a lot of good music out there. I’m stoked to be back in a little bit.

KF: I’ll be out with Wallpaper and another band called Dance Party – they’re originally from DC but they’re now based out of LA. They’re kind of like glam rock, party music. Very high energy.

You’ve had about three or four releases now?

KF: Since college the two main things that I’ve put out are the MASHed Potatoes Mixtape and the EP that I put out in the fall, but I’m stoked to get a whole lot of new stuff out there. I’ve been working on a lot of new material, trying to develop the sound and find a place where I feel it’s a good spot between hip hop/indie rock, and flesh out that niche. 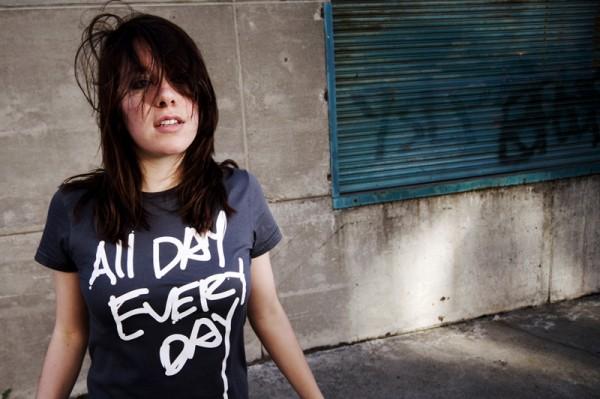 KF: I haven’t had one since then. As a child our kitchen get messed up in our house, so we couldn’t really make food for a while. We’d always go to this Mall with a food court for dinner. As a little kid I always wanted Cinnabons. When you walk into the Mall that’s all you can smell. But I haven’t had one since [the video]. It’s probably better for my cardiac health.

Have you always been a big writer?

KF: In terms of poetry or anything of that nature, I didn’t get into writing in that capacity until college. I randomly got mixed up with music. A guy that I knew made music and he and I started chatting and vibing and I worked on a song, I recorded something. There was an element to that creative process and that writing process that really intrigued me and sparked something that maybe was latent – tapped into that creative side, which was a really nice outlet in college when you didn’t feel like studying. It was a cool way to still use my brain and learn new things and enter different situations.

KF: Yeah I opened for him. I played a bunch of different shows in the spring at a bunch of different schools, and I got the opportunity to open for a lot of different people, which was cool because it gave me the chance to see how they run their show and get a behind-the-scenes look at their operations. In terms of learning how to run my own ship, that’s really helpful.

Do people ever tell you they’ve discovered music through you, from something you’ve referenced?

KF: Yeah, it sort of depends. On this new mixtape I’m working on I think there are some more – I don’t want to say obscure, but less culturally prevalent music samples. I’m hoping that will be an avenue for people to discover stuff. But definitely, I’ve heard from people at shows or online that they weren’t with the Gossip or something like that and they got into them through a sample that I’d used, which is really cool. I think that’s one of the unique things about hip hop is that it’s kind of like literature or poetry, where you can have allusions to other work. When you’re reading a T.S. Eliot poem or something, there’s always different references to previous works, and authors are always drawing on one another’s material. I think that certainly happens in a stylistic sense with other forms of music, but with hip hop it’s often very explicit in the form of a sample, which to me is a really cool and intriguing component of the genre as a whole.

Do you think female rappers can sing about things men can’t or won’t?

KF: That’s a really interesting question. I was talking with someone the other day about sort of this movement in more mainstream hip hop to be attuned to emotional issues, and that there’s an inner experience that’s getting tapped into. As a woman I think there’s pressure to be oversexualized and to make that a prime focus of not only the image but the music. That historically has been true. But there’s also been female artists, that I think by virtue of their gender, have been able to convey something a bit more emotional. I think it’s very polarized . . . the trouble is navigating that gray area instead of being shunted into an extreme on one edge of being hypersexualized or not at all, being superconscious. Like Trina vs. Queen Latifah, where it’s a very clear dichotomy. What I’m trying to do is approach that middle ground.

Was making the video for “Single and Famous” fun, or kind of scary?

KF: Lars, the guy I did the song with, he’s a good friend of mine from college. His friend went to film school and said he’d help us out for free. We filmed it in that dude’s apartment. We fucking destroyed the room. [He said] one thing we learned in film school is it’s always easier to ask for forgiveness than for permission, so we just kind of went to town on it. Everything got repainted and fixed but there were definitely feathers lurking in the atmosphere for like four months afterwards. Those feathers were so nasty. They were the furriest feathers – I was positive I was going to get sick. Throughout the video we were both spitting out feathers. It was a lot of fun though.

Do you ever think about having dancers or other musicians with you for your live show?

KF: I think about this a lot. I do ultimately want to expand the live show. Not to some like ten-piece band, but for the time being and logistically, I think as a beginning artist it’s cool to be self-sufficient. I don’t know if you know Wallpaper – you’ll see at the show – it’s him and a live drummer and I think there’s a real palpable energy about that. That’s the thing I think about adding. A way to add a new dimension of energy.

How did you come up with the song, “CRAZYtown”? You were a psychology and sociology student in University?

KF: I was a psychology and sociology major. I randomly stumbled into psychology. The department at our school was pretty big but I actually ended up being more into the sociology stuff. That song is about the way that we view mental disorders – I do think there’s something to be said for variation in the human mind and experiencing emotional swings, to some extent. Obviously there are people who are seriously mentally disordered, and that’s a whole other bag of tricks. But I do think we have a tendency to categorize things and label them to feel a sense of security and comfort based on the fact that a label exists – that there’s some quote, unquote solution. In actuality I think it’s those very vicissitudes and the way that we feel and the way that we think that cause us to be creative, that cause us to be interesting individuals. There’s something very depressing to me about feeling zero all the time and never positive vibe and negative vibe.

As far as relaxing goes – do you read a lot? Watch TV?

KF: I’m a big reader. I’m a big Mad Men fan. I watch 30 Rock and Gossip Girl. I’m not ashamed to say it. I love that show; in fact, I’ll go on record saying that Gossip Girl is a great show in the fact that it’s completely horrible [with] possibly the worst message to young girls. I think I’m being a hypocrite, but it’s funny. The girl with brown hair – she’s funny to me. She makes the whole show. It’s kind of my guilty pleasure. These high school kids act like adults.

What’s a whoosie (an early K.Flay work, the also excellent Suburban Rap Queen has a song called The Whoosie Song)?

KF: That’s an old song! It’s pronounced hooozie, and actually it’s something my grandmother used to say. She couldn’t remember the names of anything so she’d be like, hand me the whoosie, or like, I went to the whoosie yesterday. Literally for anything. No one would know what the hell she was talking about. I was twenty when I did that song, and that was probably the third song I ever recorded. Don’t judge me on that one. My brother thought that would be a funny song.