British artist Natalia Kills will be in Seattle on Sunday, November 21st at Neumos. She’ll open for Robyn, and there’s so much great buzz about Kills that I decided I needed to check out her music. I am glad I did, as her songs are wonderfully tasty confections that embrace all aspects of human feeling. Natalia Kills’ debut CD, Perfectionist features some of my favorites of the year, including “Zombie,” “Wonderland” and “Mirrors“. The work is being termed dark pop, and that totally fits. I got to talk with her in October about her craft, and I came away with the confirmation that Kills is a highly intelligent artist, and one that you really should pay attention to.
—
I watched the Love Kills, xx episodes – they’re awesome. How did you find the director Guillaume Doubet, and how did you decide that you would come up with the storylines?

He’s my best friend actually. We met in Paris. I was always desperate to work with him and then we became friends over a period of time. When I got my record deal we were like, fuck it, let’s to move to Hollywood and make three minute films, really creative visuals, express everything we wanted to express, everything we were inspired by. We really bonded and became friends over the same influences. We love film. He’s a trained director – he taught me how to direct, going silent movies together, watching Hitchock, Kubrick and Tarantino films. The show was really for me to give my early audience a chance to get to know me. I wanted them to see what was going on inside my head. I wrote down all my dreams and nightmares, all the little daydreams you have when you’re thinking of what you should have said to an ex boyfriend, or if you’re in a very frustrating road rage situation. I wrote down all of my feelings, my imagination – and then I thought, wouldn’t it be funny if I put me in it, reacting to my surreal, cerebral experience. What if I did it in the style of these things I’ve been influenced by, like Hitchock, film noir and Tarantino with all that silent poetry, poetic violence thing? And then I was like, let’s soundtrack with the music from my album so people can get a 360 feeling of who I really am. We created this world together, which is pretty much what goes on inside my own head whenever I’m left to my own thinking.

What was your favorite one to do?

Episode 5. We drove out to the El Mirage Desert. It was so funny because of the way we shot it. Half of it was shot in Interscope Records’ headquarters [with the police]. The other half, I went out to the desert in my car and when we went to film the scene with my car in it, my poor little car was almost breaking down because it was so hot and we’d driven for four hours. There’s a scene at the end where I’m in a police lineup, and I filmed that in my house. It was a lot of good fun really. That’s the first episode where we turn to color. 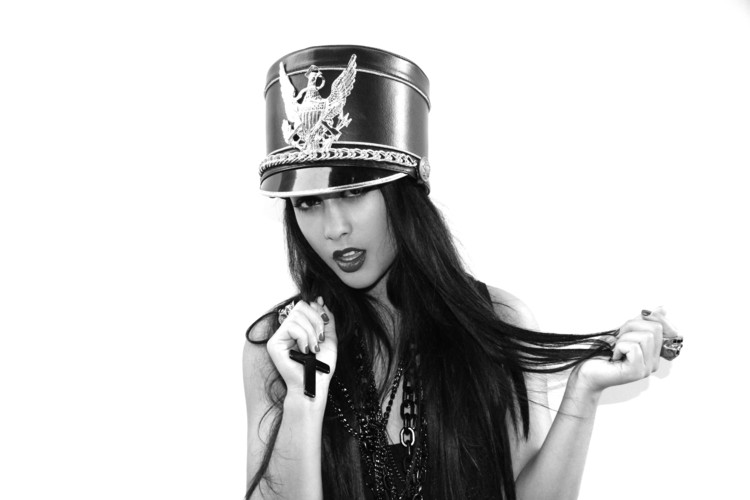 You started singing and acting when you were very young, like 5 or 6?

Yeah, probably even before that. I guess performing is something I was born doing. A lot of people are born creative, drawing pictures, playing with Barbies, doing voices, customizing their outfits with crayon – that’s what kids do. I guess that’s what I’m still doing now, following my immediate creative impulse. The only thing now is that I have audience.

You were on Coronation Street and other series?

I was. I loved being in front of the camera, but it’s not that great being praised for being the packaging for someone else’s idea. Someone else wrote the character, someone else dresses you – and that’s not for me right now. I really wanted to be not just the creation, but the creator. I’d been writing songs, and some of them had gone in film soundtracks and TV shows, so instead of making music just for making music’s sake, let me express myself through that – being the creator and the creation.

Has your family been supportive of your work?

Absolutely. I come from a really free family. I left school when I was 14, moved out – 200 miles away to London. My parents did whatever they wanted; now I get to do whatever I want. I just remember them saying, if you know what you want to be, be it. If you don’t do it, someone else will, and then you’ll be pissed.

I was reading you’re a fan of Kate Bush.

I am the biggest fan. I’m waiting for her to make another album. I know it’s never going to happen but I’m still waiting. She’s the first person in the whole of the UK to have ever written their own number one hit. She’s a huge inspiration to me. Her music was super experimental and confrontational. She did what I’m trying to do, in the sense that she expressed herself and if it wasn’t a hit, it didn’t matter, cause that was her. And if it was a hit, it was wonderful. She’s so confrontational, especially in “Running up That Hill” and the lyric is If I only could/I’d make a deal with god/and get him to swap our places. That’s just incredible. People don’t write songs like that because they’re too busy talking about drinking shots and shaking their booty – not that there’s anything wrong that, that’s fine. I do miss that confrontational and honest music.

In the Love Kills, xx episodes, you’re wearing an amazing skull ring. Is that yours and do wear it the rest of the time?

I’m wearing it right now – I wear it everyday. It’s Alexander McQueen, and it’s a tragedy because I bought it the day before he died so I felt like I cursed him. The first purchase I make from the brand and the next day the designer’s deceased. I have two of them and I’m probably going to buy my third when I get back off this tour. They’re making another one – it’s quite similar but it’s got this big crown on it.

What can people expect from a Natalia Kills live show?

It’s an extension of my lifelong dream. When I was a little girl I didn’t want to be a princess or an astronaut or a queen. Actually I wanted to be in a bad bitch girl gang. That’s basically what my live show is about, breaking hearts, breaking legs, breaking everything you can really. Have you seen the film Sin City? It’s very black and red and it revolves around this street gang – of not hitmen, hitwomen. And they’re all glamorous and they run the town. The police rely on them for everything, so you see these incredible strong women wearing fishnets and bras, and fucking shit up, and being business like about it. That’s kind of what inspired my live show.

It’s true that will.i.am found you, “discovered you” one day when you were shopping in Los Angeles?

I was out shopping, that’s right, and a man ran into the shop [in Hollywood]. He said, hey you have a very strong image, what do you do – I hope you’re a recording artist? I said, I am actually, here’s my MySpace and my email. An hour later he hit me back, and he said, I’m a manager, I want you to meet someone, a producer/Dj. We drove over to this giant house, and there’s will.i.am sat at this table with all this technology. I was like, what’s will.i.am doing here? And he said that’s my friend I wanted to introduce you to. He [will.i.am] signed me to his imprint on Interscope, and now I’m on Cherry Tree through Interscope.

The name Natalia Kills, it’s you?

It is me. Everything I’ve done and experienced has led me to be who I am now. My real name is Natalia. The phrase to kill is when you work hard and you do the best, you kill it. Kills to me is just and expression for anyone who knows what they want and they go for it.

Oh my god, fuck yeah. I do. Even if it’s a bad one, it feels good, because they’re still using music to create a suspense, a drama that provokes a reaction from the audience. That’s what I try to make my music about, whatever the emotion behind the song being in the music, in the instrumental, in the beat. Music is about creating a soundtrack to the emotions and opinions you have. If you mute a horror film, it’s not scary, you don’t know when the killer’s coming. When the killer finally comes it’s not a big ordeal because nothing gave you the suspense to lead up to it. Learning that, from watching horror films and understanding how to celebrate and find exhilaration in pain and violence – and finding the poetry in violence, like Tarantino does – it’s a really wonderful way to apply it to my music. My music, they’re calling it dark pop, and really it’s not just a celebration of being in a club, or feeling like you should celebrate. It’s a celebration of everything – heartache, revenge, of everything you’ve been through, longing, wanting and loneliness, sadness and love and struggle. It’s the celebration of the triumph of having happiness and finding perfection through all of the obstacles.
—

Check out An Inside Look at Natalia Kills here.