Chicago’s AM Taxi released their debut CD, We Don’t Stand A Chance this year. It’s been such a great year for new CDs and I have definitely added this one to my list of top CDs of 2010 (another one, Hey Champ’s Star, comes from Chicago as well). AM Taxi is unaffected rock and you should really check them out. They’re appearing tomorrow, August 14th at the Gorge as part of Vans Warped Tour, and I talked with their vocalist/guitarist Adam Krier recently. I wanted to know about the songwriter and lyricist in Krier – and also had some questions about their fabulous debut.

What’s something that you really love about Chicago?

Adam Krier: The people. The people are incredible – my friends and family. The music and the food. Deep dish, Chicago-style pizza. It’s not really the same anywhere else in the country. There’s something about the water in the dough. It’s the only place that really does it right, Chicago.

You seem to be a pretty big fan of the Clash.What’s one of your favorite Clash songs?

AK: I especially like the early part of their career. The first three records. “Clampdown,” “Death or Glory” –

“Death or Glory” is a great song.

How did you discover them?

AK: As a teenager. I started to get into punk bands at that time and I wanted to know what influenced those bands.

AK: I love all that stuff, Jimmy Cliff . . . Toots and the Maytals. 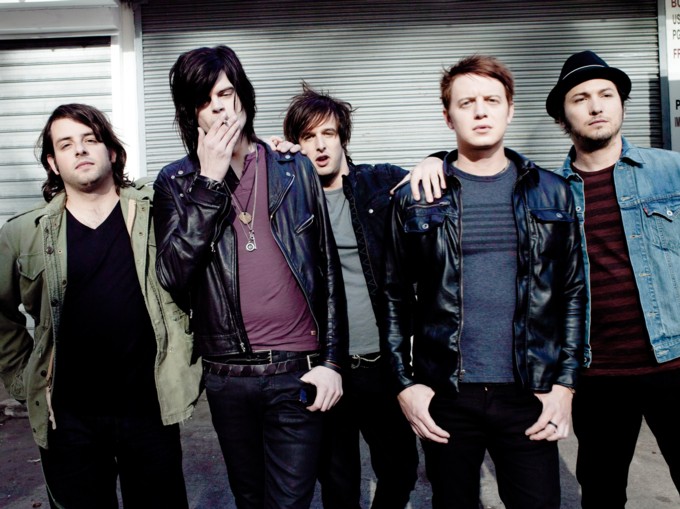 Your lyrics are very straightforward and honest. Do you try to make them something people can relate to?

AK: Yes and no. The goal is that it’s something people can put on and hopefully it’s therapeutic but I don’t really think that way when I am writing it. It has to come out honestly. I wanted to create something that people could put on and if they’re having a bad day or they’re excited about the weekend . . . something to be a soundtrack.

I saw an interview with Bruce Springsteen and he’s fascinating.

AK: He’s got that storyteller character.

Is “Fed Up” the first video AM Taxi’s done?

AK: It’s the second video but it’s the first single. We did another song to introduce ourselves – we’re a relatively unknown band at this point. We put out “The Mistake,” and the video for “The Mistake” – that was back in December (2009).

You recorded the album in Austin? What was Austin like?

You also recorded the album on tape?

AK: That’s the way he [producer Mike McCarthy] makes all his records, which I think is cool. Everybody performs together instead of one instrument at a time, which is the way a lot of people do it now, adding one thing at a time. You lose the live vibe after a while.

The sound is just great. You wanted a live show sound?

AK: We wanted to keep it as real as we could. There are mistakes on there – a couple tuning issues. But it’s fine because it’s just the same kind of mistake that we might make if we were really getting into it.

Does the band have arguments on tour?

AK: The trick is to give people space when they need their space. Be aware – communicate. Two of the guys are brothers [John Schmitt, guitar and Luke Schmitt, keyboards], which is amusing. You have that sort of family mentality. It’s fun to get them going. They can scream and yell at each other and it doesn’t matter.

How did you get on the Uncovered series on Playboy?

AK: Not sure how it came about. We did a song for them. It wasn’t nearly as exciting as everyone thought when they saw we were gonna be on it. No bunnies. They gave us a couple bottles of liquor and we were on our way. It was fun though.

You have a lot of longstanding fans.

AK: We don’t seem to have a demographic, which I think is great. I don’t know what the label thinks of it. The people that come up to the merch table can be young teenage girls and guys, could be people in their 30s or 40s, sometimes parents of the kids, college or post-college . . . it’s all over the board. I think maybe it’s because we didn’t latch onto a trend – or we’re trying really hard not to. We’re doing straightforward rock and roll. A lot of groups like to come along and say hey we’re original, the next big thing. We’ll be the last group to claim we’re doing something no one’s done before.

Where did the song “Charissa” come from?

AK: It’s about a couple I know, a little bit older but not much older. They’re awesome. They’re kind of motorcyle-riding . . . and they like to drink. Charissa works hard but they take care of each other. Every now and then he’ll screw up but she’s forgiving. They’re truly in love. It’s nice to see that.