Hey Champ returns to Seattle this Sunday, July 25th for the Capitol Hill Block Party. The band released their debut LP, Star, just this month and it is now one of my favorites of the year. It’s danceable, joyous pop with a broad appeal and not one bad track. I talked with the Chicago band’s members Saam Hagshenas, Jonathan Marks, Pete Dougherty this week about their fabulous video for “Neverest,” how the band formed and their other project, Hey Champ DJs.

You’re signed with Townie Records – how did you find each other?

Saam: Really randomly. We had just played Lollapalooza and were out on the road and we got a phone call from Brent [Stiefel, Founder and President]. He heard us through a mutual friend and he was looking to start his label and asked how we felt about going to an indie. We were a little jaded by what we’d heard about labels and our own experience with a major label so we were definitely down with indie. It worked out. It got our album out.

It’s fantastic to be the first band.

We didn’t have to wait in line for another release.

Did all three of you met at Princeton?

Pete: Jonathan and I met at Princeton. I lived down the hall from him my freshman year when he was a sophomore. Saam and Jon know each other from growing up. They played in a band together in Rockford, Illinois.

What did you study?

Pete: I studied a bunch of things. I switched majors like four times but I graduated with a degree in music composition, which is what I always wanted to do anyway.

Saam: I did French and accounting. I went to law school and right when I finished Jonathan moved back to Chicago. The law thing went to the wayside and music became the main thing.

What kind of law did you practice?

Saam: Criminal defense. I worked in the public defender’s. 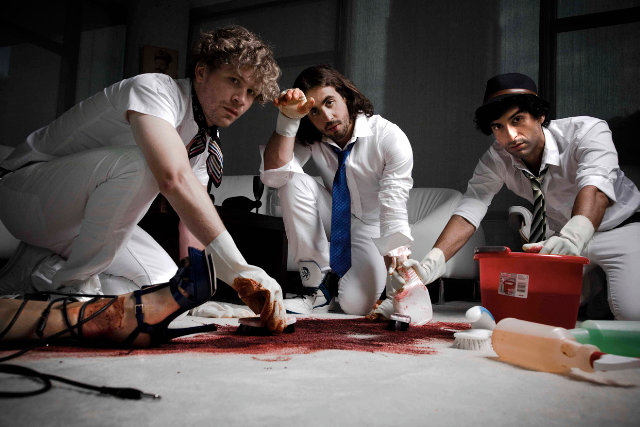 Did both of you start learning music when you were very young?

Pete: We all started picking up instruments when we were around five years old. I played classical and then I started playing jazz later on.

Saam: I took piano lessons when I was growing up. I never took guitar lessons. Jonathan studied drums in Rockford and in school.

Who’s the lyricist of the band? Is the music all written together?

Saam: I sing, so I write the lyrics. When we started I’d already been writing songs so some of the songs were ones I had. Now that we’ve started the project we’ve been bringing in parts and collaborating and it’s a much better sound. We’ve established the kind of sound we’re going for. It’ll be like that with everything. Jonathan’s the drummer but he doesn’t necessarily come up with the drumming parts. He might come up with a keyboard lick or Pete might come up with a drum lick. We’re all very involved.

You toured with the Sounds last year? That is an awesome combination.

Pete: It was great. Their crowd definitely dug us and while we don’t have a sexy female front person for our band, the crowd accepted us.

I read in an interview where, I think it was Saam described your sound as dreamo?

Saam: It was probably Jonathan that said that.

Saam: It’s so silly. The way we produce it sometimes, we use synthesizers so people say oh they’re 80s influenced. It’s really just the instruments we have in front of us. The main goal for us is to write pop songs, and that reminds us of the music that we listened to. The older music we really like – the Beatles and Pink Floyd and through the 80s and 90s. Not just focusing on an 80s dance, synth sound for dance music.

Pete: I know it’s a cliché to say this. Jon can be kind of arbitrary because we never know what to label ourselves as a rock band or a pop band or an electro band. Dreamwave and chillwave. . . there are so many genres. Dreamo – we’re just having fun with it.

Saam: Something tells me chilllwave is not going to be relevant in ten years.

I found a song called “Eugene,” off your self-titled EP. I really loved it

Saam: That was while Pete was still a senior in college. He wasn’t technically in the band yet but he was at those sessions when Jonathan and I were recording them in Chicago. You can kind of tell we were toying around with synthesizers but we just needed someone who had more knowledge of them. Getting Pete in the band was so instrumental for us to complete our sound.

Can we still get it?

Saam: We might release it later. It’s a different sound – typical of our early indie rock thing. We knew we wanted a bigger sound. We found that on this album.

Do you plan on doing more of Hey Champ DJs?

Pete: We just dj’ed the other night in San Diego at this place called El Dorado and it was awesome. We’re just about to release a new remix in the next two weeks. Being able to play out our remixes or play out our songs with the other stuff that we love – it’s a lot of fun.

Saam: I think it’s confusing for some people. We’ve seen people who are like, you’re just djs right? They think if they see Hey Champ it will just be DJs. But actually it’s better that way. People will be like, I only knew them as a band and I didn’t know they did all these cool remixes or if it’s as djs they didn’t know we were a band and then they’ll check us out. It’s cool. We like to cover all our bases.

The song “Fallujah,” off one of your mixtapes – is that one you wrote?

Saam: Yeah – we also have a few more almost old school house tracks. That song came out of a period when we were dj’ing a lot of Chicago house music nights and electro music nights.

[Jonathan comes in to the room for the interview]

Jonathan: I’d like to remix a Penguin Prison song. Probably something off Led Zeppelin’s Presence.

Pete: I wouldn’t mind doing something just as straight as a rock or pop band because there’s so much inter-love in electro acts that it would be cool for us to do something completely left and center.

Jonathan: It’s a lot easier for us when the track doesn’t already have that club feel. The original track already sounds like a remix. It’s much cooler when you take something and put it in a different context.

Jonathan: Martin Circus’s “Disco Circus”. We still play that one a lot when we dj.

The video for “Neverest” is awesome. Are you in a cage?

Saam: Basically we just wanted to put it out there and let people interpret it. Some people love it, some people hate it – but they’re talking about it, which is cool.

I love it. I don’t know if the guy in the video was supposed to be an alien, but I am going to ask. What do you think about aliens? Do you believe in them?

Pete: I heard there were a bunch of UFOs spotted in China. I heard that on the news this morning.

You don’t want to relive that. I read that you’re all from different religious backgrounds?

Saam: The funny thing is that we were all born of the three major religions but we all believe the exact same thing – that it’s all kind bullshit. Right now the religion is music. We’re in the studio every Sunday.

What’s the story on “Steampunk Camelot”?

Saam: We actually thought a lot of people would hate that song because it’s not like the rest of the album. It was an opportunity to see if, we approached things poetically with the lyrics and the music, how would that turn out? It’s going to bode where we’re gonna go direction-wise in the future.

Pete: It’s something we wrote knowing that it would be the album’s closure. In a few places people compare it to “The Final Countdown” and it’s nothing like that.

Saam: It’s supposed to sound more like the end of Scarface, in my opinion when Tony Montana dies. It’s an homage to Giorgio Moroder. No “Final Countdown”. Even at Moroder’s cheesiest moment –because there’s good cheese and bad cheese – even his bad cheese is good cheese. That was the sign of the times. He gets away with it – and he’s got a kick ass mustache.

Saam: That’s the way we approach music. I used to be so into indie rock – really lo indie. Then I’d go to the concert and I’d be falling asleep. We’re very conscious of that when we play live.

What were your first concerts?

Jonathan: I grew up with Cheap Trick. They were and still are good family friends so I’ve been to about 200 Cheap Trick concerts. The first one was when I was 4. After that it was all Metallica, Pantera and metal from the 90s.

Pete: My parents took me to a Rolling Stones concert when I was in the third grade.

Saam: Mine was probably Oasis – but I was older.

Pete: Jonathan Ames. Some people know him from the HBO series Bored to Death. . .all his books are hilarious.

Jonathan: I have a lot of Russian blood so I keep going back to those classics. Dostoevsky.

Saam: I’ve always been to really dark stuff. August Strindberg’s Inferno is pretty unbelievable. I’m a pretty happy guy but I guess I like to live in someone else’s dark world.
————